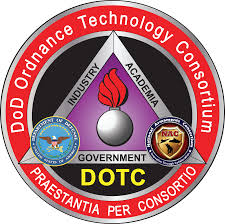 The Department of Defense Ordnance Technology Consortium (DOTC) was commissioned by the Under Secretary of Defense for Acquisition, Technology and Logistics as a DoD initiative. The goal was to facilitate collaborative Government, Industry and Academic ordnance technology development and prototyping. Initially, in 2000, the National Armaments Consortium (NAC) was partnered with the Army’s Warheads and Energetics Technology Center, or WETC, located at Picatinny Arsenal in New Jersey.  Shortly after the NAC/WETC  partnership was forged, the NAC expanded its role and became the industrial/academic component of the newly formed DOTC when it was stood up as a purple organization in December 2002.

The NAC is the industrial/academic component of the DoD Ordnance Technology Consortium, an enterprise established by the Office of the Secretary of Defense to serve as the focal point for ordnance system technology research and development to address the Department of Defense’s long-range science and technology objectives.